THE SPRINGS is proud to announce that our Elementary program will be a full Spanish Dual Language Program. This program is intended for both children who do not have a previous knowledge of Spanish as well as those who do and would like to improve.

Being able to speak multiple languages will open the door for children to be able to speak with more people and in more places. According to the Center for Advanced Research on Language Acquisition at the University of Minnesota, “there’s a well-established positive relationship between basic thinking skills and being a fully proficient bilingual who maintains regular use of both languages. Fully proficient bilinguals outperform monolinguals in the areas of divergent thinking, pattern recognition, and problem solving.

Bilingual children develop the ability to solve problems that contain conflicting or misleading cues at an earlier age, and they can decipher them more quickly than monolinguals. When so doing, they demonstrate an advantage with selective attention and greater executive or inhibitory control. Fully proficient bilingual children have also been found to exhibit enhanced sensitivity to verbal and non-verbal cues and to show greater attention to their listeners’ needs relative to monolingual children. Further, bilingual students display greater facility in learning additional languages when compared with monolinguals.” (http://carla.umn.edu/immersion/documents/ImmersionResearch_TaraFortune.html)

According to wordlatlas.com, Spanish is the second most spoken language in the United States with more than 37 million people and growing. Worldwide there are more than 414 million people who speak Spanish in comparison to the 335 million English speakers. Spanish is a growing language with more and more people speaking it.

How is Spanish Implemented at THE SPRINGS?

Spanish in the Toddler and Children’s Houses

Although there is no formal dual language program for each of these houses, the children will be introduced through a variety of materials as well as group and individual lessons from our part-time Spanish teacher. 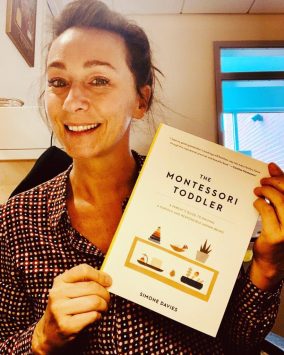 
Natalie earned her Montessori Credential through the Center for Guided Montessori Studies and has spent over a decade in toddler, primary and upper elementary Montessori classrooms.  Natalie is a frequent contributor to Montessorium.com and has presented at the Montessori Foundation/International Montessori Council’s annual International Conference. She holds holds two Master’s Degrees, including in Curriculum and Instruction (K-6). She is a former Peace Corps volunteer in West Africa. 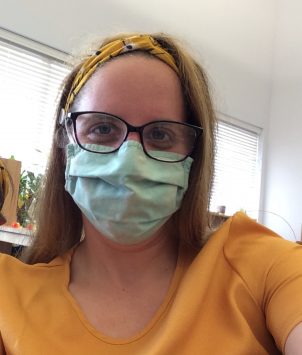 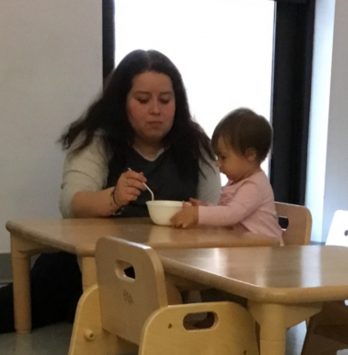 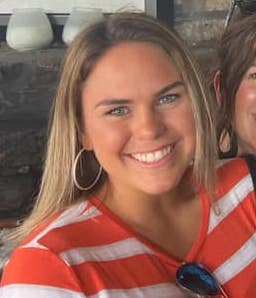 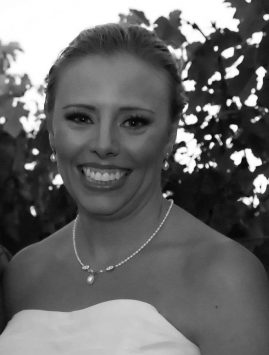 Ms. Melissa has a bachelor’s degree in Business, Finance and after working in that field for over 11 years decided to travel around the world to live her life. While traveling she came upon a Montessori school in Australia and immediately knew where her life needed to go. She received her AMI (Association Montessori Internationale) diploma from The Washington Montessori Institute in 2013 and has a Masters in Education from Loyola University in Maryland. She was a lead teacher at The Del Ray Montessori School in Alexandria and then took time off to focus on family.

Ms. Melissa enjoys spending time with her family: Mike, Siena (5 years old) and Aiden (3 years old). She loves to contribute to her neighborhood by providing meals for families in difficult times and putting together activities- from tutoring to outdoor scavenger hunts for the many neighborhood children. In her spare time, Ms. Melissa enjoys gardening (newly found hobby since the pandemic) and relaxing on the sofa watching movies after her children go to bed. 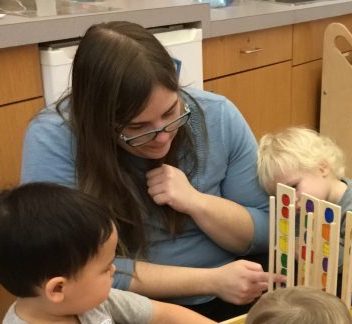 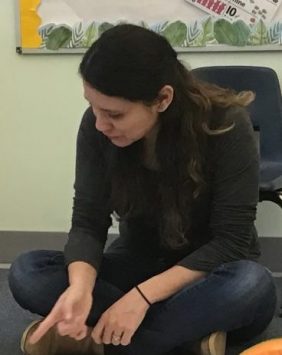 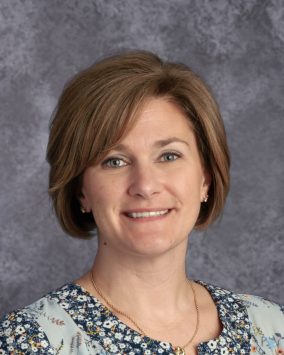 Ms. Traci received her Bachelor of Science in Elementary Education from Ohio Dominican College in 1998. Prior to moving to Maryland, she taught in multiple grade levels across the country as she accompanied her husband on his military assignments. She is just finished her fourth year of teaching fourth grade at the Calverton School. 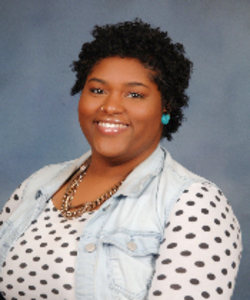 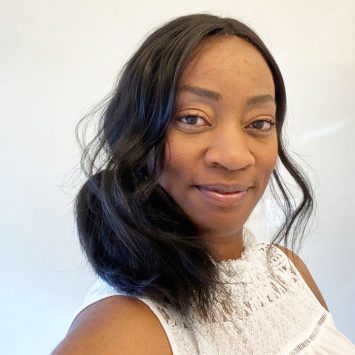 I am a passionate teacher, dedicated to the Montessori method. I received my Montessori teaching credential from the Toronto Montessori Institute in 2001 and a Master’s Degree in Montessori Education from St. Catherine University in 2018.

As a lifelong learner, I strive to continue to build on my knowledge and to grow in my abilities as a teacher. I love languages and speak French fluently, understand some Spanish and German and hope to master those in the near future. While I love all of the areas of the classroom, the language curriculum has a special place in my heart. The most special part of being a Montessori teacher for me is being able to see the unique abilities of each child and to guide their learning by tapping into their individual strengths and interests. 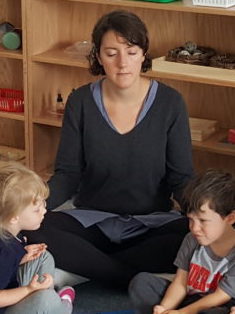 Ms. Sheridan joined THE SPRINGS in the fall of 2015. Before working at THE SPRINGS she spent 3 years teaching in a Children’s House classroom in Beijing, China. After seeing the Montessori method and philosophy have such a positive effect on her students, Ms. Sheridan decided to pursue an AMS (American Montessori Society) primary certification at the Etonkids Montessori Teacher Training Academy, which she completed in June 2015. Prior to working abroad, Ms. Sheridan worked primarily with children and adults with varying disabilities and mental diseases. Ms. Sheridan has a bachelor’s degree in psychology from Marshall University in her beautiful home state of West Virginia and a Teaching English as a Foreign Language certificate from the Boston Language Institute.

Ms. Sheridan enjoys traveling with her husband and daughter, cooking new recipes, eating new dishes, as well as reading about cooking and eating. 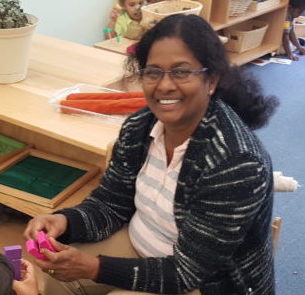 Ms. Mary lives with her family in Chantilly.  She completed her Montessori Infant and Toddler Certification at the Center for Montessori Teacher Education in North Carolina. 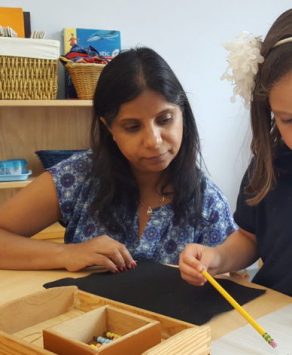 Ms. Deepa has a bachelor’s degree in Psychology and an American Montessori Society (AMS) Early Childhood Credential. She completed her AMS certification at the Northern Virginia Montessori Institute six years ago alongside Ms. B and Mr. Dan. Ms. Deepa began working in Montessori schools 14 years ago and has spent the last six years as a Lead Teacher, first with Dulles Montessori School and most recently with The LePort School, (formerly The Boyd School). Additionally, Ms. Deepa has extensive experience working as a behavioral therapist for children with ADHD, autism, and dyslexia. Ms. Deepa also has a passion for cooking culinary dishes from around the world. She loves to read and enjoys spending time with her family. 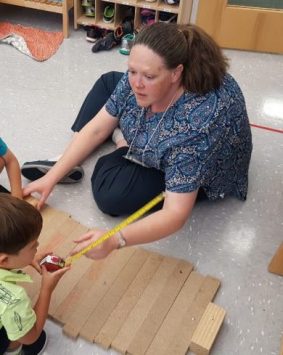 Ms. Beth joined THE SPRINGS in September 2014.  She holds an AMI (Association Montessori Internationale) diploma from the Montessori Education Center of Arizona and a bachelor’s of Science in Sociology.  Ms. Beth has been teaching in the classroom since 2003. Ms. Beth was also a Montessori child who feels that Montessori is a way of life and is such a joyful way to learn.

Ms. Beth is from the eastern North Carolina area and has family in Virginia and feels as though she has come home.  She moved here from Florida and is readjusting to cooler temperatures.  Ms. Beth has a love of books and enjoys sharing her knowledge of books with the children. 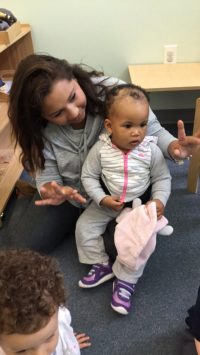